Mine export surge holds up economy

A record $296 billion in forecast resources and energy exports this year is turbocharging Australia’s economic rebound from the COVID-19 downturn and will help offset the withdrawal of the federal government’s JobKeeper wage subsidy.

Article by Angela Macdonald-Smith and John Kehoe, courtesy of the Australian Financial Review 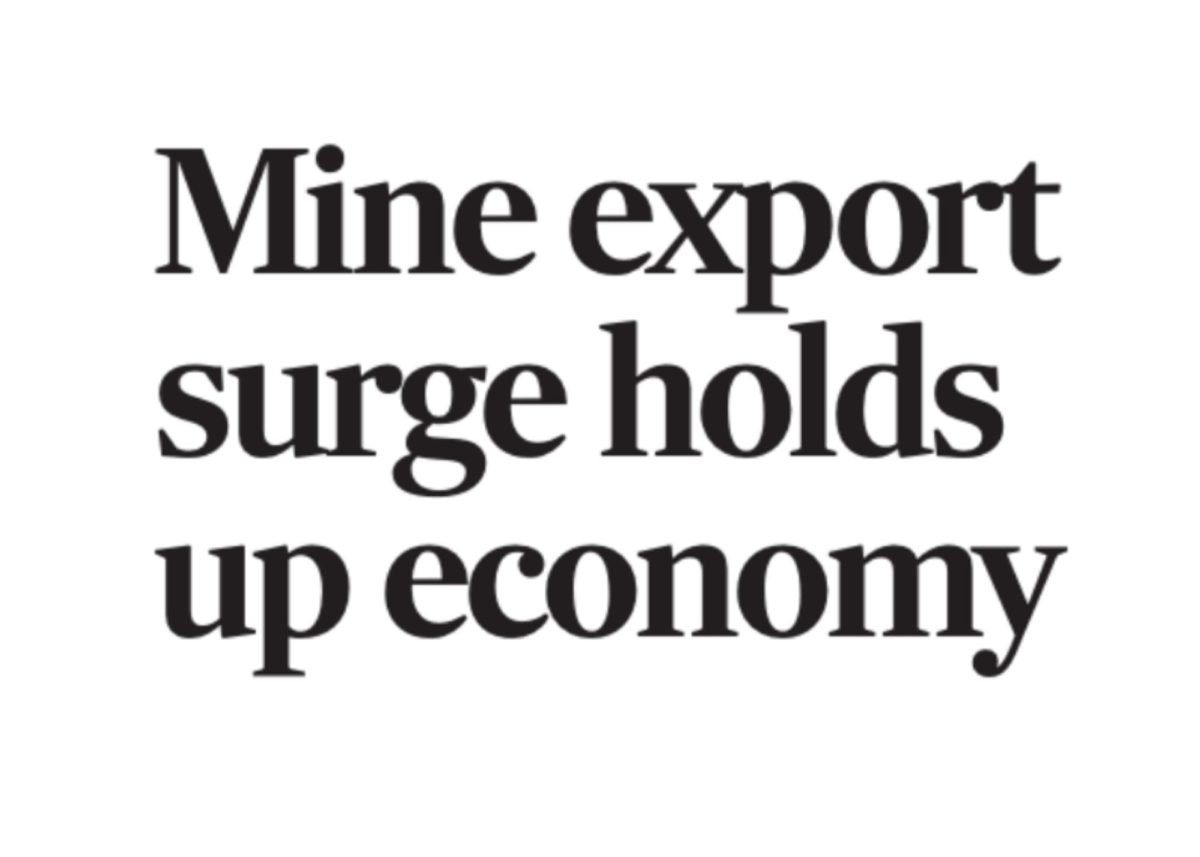 A record $296 billion in forecast resources and energy exports this year is turbocharging Australia’s economic rebound from the COVID-19 downturn and will help offset the withdrawal of the federal government’s JobKeeper wage subsidy.
China’s strong demand for iron ore is underpinning the new commodity super cycle, despite ongoing diplomatic and trade disputes between Beijing and Canberra.
While the international push to tackle climate change will challenge thermal coal, demand will rise for commodities including copper used in green infrastructure in the transition to a low-carbon world, as well as lithium and nickel mined to make batteries.
The record high resources and energy exports forecast for the year ending June 30 eclipses a previous high of $291 billion posted last year, according to the quarterly report by the Department of Industry, Science, Energy and Resources.
Surging mining exports are also helping the government’s budget recover faster than expected, though it remains deep in deficit.
The export analysis shows how the broader mining and energy export trade has shrugged off the tensions with China that have hurt shipments of coal, barley, wine, seafood and wool.
China said on Friday it was extending for five years tariffs on Australia’s $1 billion of wine exports to Asia’s largest economy, exacerbating the diplomatic tensions.
Nevertheless, China’s stimulus spending on buildings, roads and bridges is fuelling strong demand for exports of iron ore, which only topped $100 billion a first for any commodity in 2019-20. “Demand for many of Australia’s commodities has been driven higher by the economic recovery, particularly the economic rebound in China,” the Resources and Energy Quarterly said.
“Production constraints elsewhere in the world have seen prices gain momentum in early 2021 iron ore, LNG and base metals have reached multi-year highs while there has been some restoration to coal prices.” The upward revision in commodity exports was led by iron ore, where earnings are forecast to reach an alltime high of $136 billion, up from December’s estimate of $123 billion, according to the report.
Iron ore mine outages in Brazil due to tailing dam failures and COVID-19 ravaging parts of South America have further increased demand for iron ore.
A rapid jobs recovery and record iron ore exports have delivered a $23 billion boost to the federal budget in three months, putting the deficit on track for a still record $150 billion by June well below the $197.7 billion projected in the mid-year update.
Western Australia’s budget, which is in surplus despite the recession last year, has been propped up by mining royalties.
The federal government’s $90 billion JobKeeper subsidy ended yesterday for the remaining 1 million workers and about 350,000 businesses which remained on the 12-month program.
Unemployment has fallen to 5.8 per cent and Treasurer Josh Frydenberg said yesterday the Treasury expected the jobless rate to trend lower in the second half of the year, despite some potential near-term disruption to the labour market.
The latest quarterly forecast for 2020-21 export earnings represents an upgrade from the department’s December estimate of $279 billion.
While a 3 per cent dip in export earnings is forecast in 2021-22 to $288 billion, this year’s total is expected to defy the global economic downturn thanks to price momentum early this year in iron ore, LNG and base metals. Coal has also seen a recovery.
“Coal markets have quickly adjusted to the Chinese trade disruptions on Australian coal,” the report said.
Federal Resources Minister Keith Pitt said the report “confirms the remarkable resilience and strength of Australia’s resources and energy sector”.
He said exports were forecast to remain “strong” over the next five years, driven by continuing demand for iron ore and growth in technologyrelated commodities such as lithium, nickel and copper.
“Iron ore is benefiting from both high prices, as well as decades of investment, innovation and automation, which have placed Australia at the forefront of the global iron ore market,” Mr Pitt said.
The report said Australian exporters had “filled the void” left in India, Japan and South Korea as China switched to buying cargo from Indonesia, Russia, Colombia and elsewhere, while noting a hit to coal prices.
It also pointed to a “downside risk” to the latest forecasts from potential further disruption to Australian resources and energy commodity trade with China, alongside the risk of delays in the successful rollout of effective COVID-19 vaccines around the world.
Still, iron ore export earnings are expected to retreat from their highs to $104 billion by 2025-26 as prices soften, with the department estimating average iron ore prices of $US77 a tonne at that time, down from this year’s forecast $US128 a tonne.
Australia’s iron ore exporters have been warning that prices will inevitably fall as supply from other parts of the globe comes online.
“Australia’s dominance of iron ore markets will face challenges,” the department said, pointing to expected increases in output from South America and Africa over the next five years “Global iron ore markets are expected to remain tight, with slow growth in both supply and demand over the next five years.” LNG exports, however, are expected to plunge by 34 per cent this financial year to $33 billion, hit by the crash in oil prices last year that fed through to contract tariffs. LNG export earnings are seen recovering to $45 billion by 2025-26, still shy of last year’s $48 billion, based on an assumption prices will recover to $12 a gigajoule from an average of $8 gigajoule this year.
Metallurgical coal earnings are expected to recover after a 34 per cent drop this year, in line with higher prices. Coking coal earnings are seen dropping to $23 billion this financial year from last year’s $35 billion, recovering to $31 billion in five years’ time.
Exports of thermal coal are forecast to plunge this year to $15 billion but to remain resilient around that level until 2025-26 at least, despite escalating climate pressures on coal power generation.
Lithium is the stand-out in the five year forecast, with exports seen surging more than five-fold in real terms from an estimated $1 billion this year.