Article by Hamish Hastie courtesy of the Sydney Morning Herald 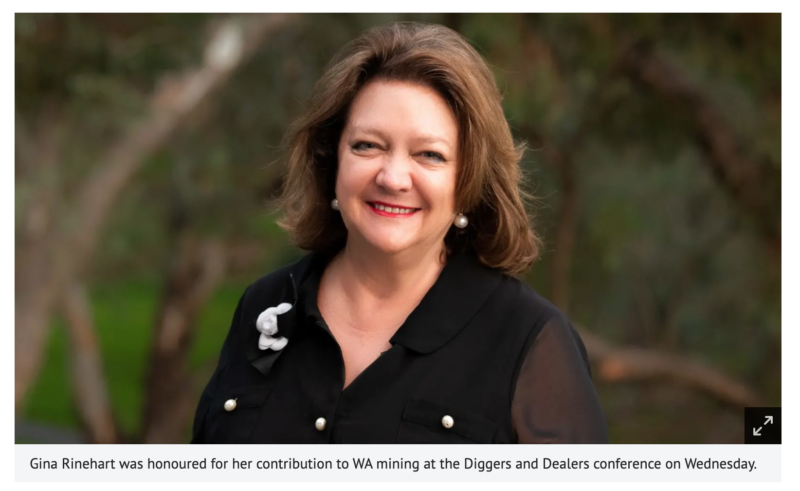 Gina Rinehart, the recent $16 billion Saracen Minerals-Northern Star merger deal, and gold miner Ramelius Resources have been honoured on the final night of the Diggers and Dealers mining conference in Kalgoorlie.

Ms Rinehart, Australia’s richest person and chairman of Hancock Prospecting, was recognised for her contribution to the industry with the GJ Stokes award at the Westrac gala dinner.

It’s the second year in a row Ms Rinehart, daughter of the late iron ore pioneer Lang Hancock, has been recognised at the conference after Hancock Prospecting won the digger award last year.

Judges said Ms Rinehart had turned Hancock from a fledgling operation to one of the largest private companies in Australia and the majority owner of one of Australia’s single largest iron ore mines in Roy Hill.

Despite being announced last week, the Northern Star and Saracen merger remained the hottest topic of discussion at the conference, which is Australia’s biggest mining-specific event, so it was no surprise the two companies took out the coveted dealer of year award.

The companies began working closely together after ending up in a 50/50 joint venture in the famous Kalgoorlie Super Pit.

Saracen purchased its stake in November 2019 from Canada-based Barrick Gold for $US750 million, while Northern Star joined the party in January after purchasing the other 50 per cent from the USA’s Newmont Goldcorp for $US750 million.

Through that project, the two companies found potential for cost savings throughout their entire combined operations.

Northern Star executive director Bill Beament told conference delegates the positives of the deal were so easy to identify it took less than an hour for both parties to reach an agreement.

Ramelius Resources was recognised for its outstanding results over the past year with the digger award. Judges commended the WA gold miner’s 420 per cent increase in net profit after tax over the past financial year.

The awards wrapped up an eventful three days at the conference, which went off without a hitch despite a global pandemic restricting the crowd to mostly WA-based delegates.

Chairman Jim Walker said despite the challenges it had been a successful conference with 2349 people logging on to the presentation live streams from as far afield as Alaska, the UK and Indonesia. Live streams peaked during WA Premier Mark McGowan and the Northern Star-Saracen presentations.

Mr Walker said they conducted 11500 temperature checks of the 1950 delegates, 19 per cent of whom were women.

The gold price, which hit more than $US2000 an ounce in August, was creating a buzz and prompted expectations of more mergers and acquisitions in the sector.

PCF Capital managing director Liam Twigger told reporters it was the best market for commodities and capital since the 1960s.

“You can get the gold price going up, you can raise equity, but what brings that confidence to go and do deals,” he said.

“It’s that animal instinct and I think that is now there as a result of the Northern Star and Saracen deal. It has sparked something and it is the missing ingredient. A lot of capital has come into the market in recent months but the M&A has been quiet, until now.”

China relations cropped up in several presentations and press conferences with most speakers, including Mr McGowan, calling for the federal government to ensure they remained strong for the benefit of the sector.

Nickel miners were buoyed by Tesla founder Elon Musk’s recent call to the sector to produce as much of the metal as they can sustainably and at the right grade.

Miners such as BHP and Western Areas spruiked the long-promised boom in EV sales they said would drive significant growth in the sector.

WA’s hard borders were also a hot topic, with many companies worried it will damage the mining sector’s ability to access skilled labour.

The gender imbalance and skimpy debate also cropped up again, with FMG boss Elizabeth Gaines lamenting the lack of female presenters and that she “didn’t get” the allure of skimpies.

Mr Walker said the 2021 Diggers and Dealers would return to its traditional August spot on the calendar.