Article by Peter Law courtesy of The West Australian.

How WA has fuelled the nation’s recovery. 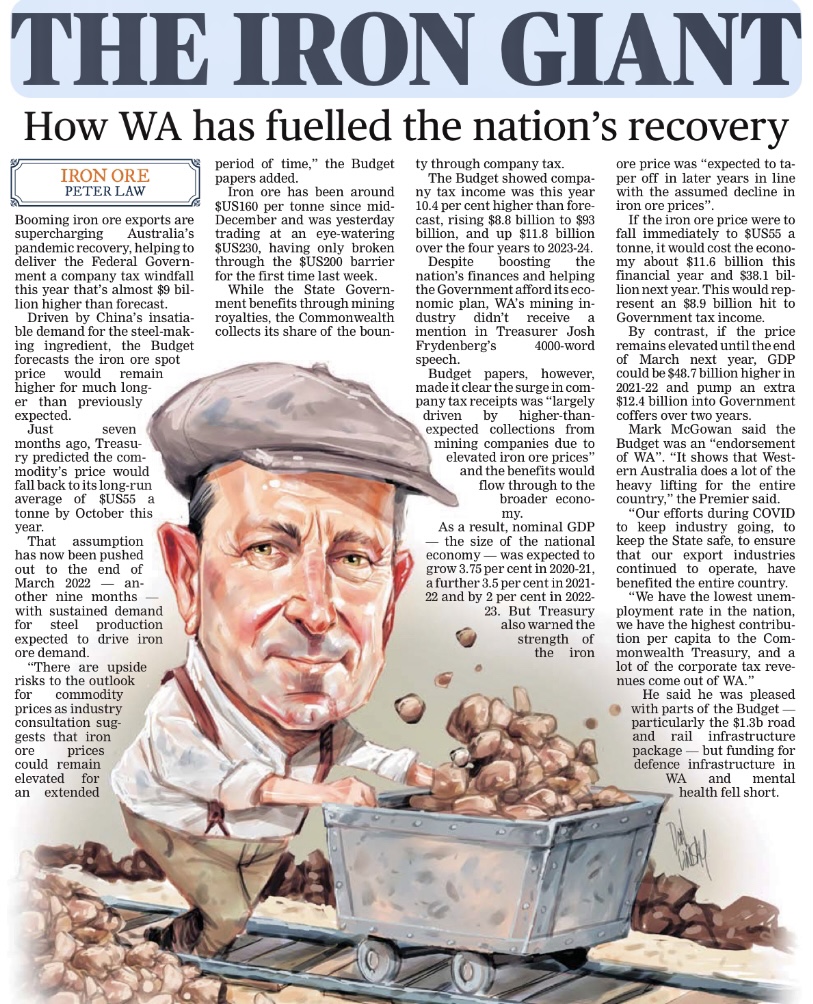 Driven by China’s insatiable demand for the steel-making ingredient, the Budget forecasts the iron ore spot price would remain higher for much longer than previously expected.

Just seven months ago, Treasury predicted the commodity’s price would fall back to its long-run average of $US55 a tonne by October this year.

That assumption has now been pushed out to the end of March 2022 another nine months with sustained demand for steel production expected to drive iron ore demand.

“There are upside risks to the outlook for commodity prices as industry consultation suggests that iron ore prices could remain elevated for an extended period of time,” the Budget papers added.

Iron ore has been around $US160 per tonne since midDecember and was yesterday trading at an eye-watering $US230, having only broken through the $US200 barrier for the first time last week.

While the State Government benefits through mining royalties, the Commonwealth collects its share of the bounty through company tax.

Budget papers, however, made it clear the surge in company tax receipts was “largely driven by higher-thanexpected collections from mining companies due to elevated iron ore prices” and the benefits would flow through to the broader econo my.

If the iron ore price were to fall immediately to $US55 a tonne, it would cost the economy about $11.6 billion this financial year and $38.1 billion next year. This would represent an $8.9 billion hit to Government tax income.

By contrast, if the price remains elevated until the end of March next year, GDP could be $48.7 billion higher in 2021-22 and pump an extra $12.4 billion into Government coffers over two years.

Mark McGowan said the Budget was an “endorsement of WA”. “It shows that Western Australia does a lot of the heavy lifting for the entire country,” the Premier said.

“Our efforts during COVID to keep industry going, to keep the state safe, to ensure that our export industries continued to operate, have benefited the entire country.” “We have the lowest unemployment rate in the nation, we have the highest contribution per capita to the Commonwealth Treasury, and a lot of the corporate tax revenues come out of WA.” He said he was pleased with parts of the Budget particularly the $1.3b road and rail infrastructure package but funding for defence infrastructure in WA and mental health fell short.