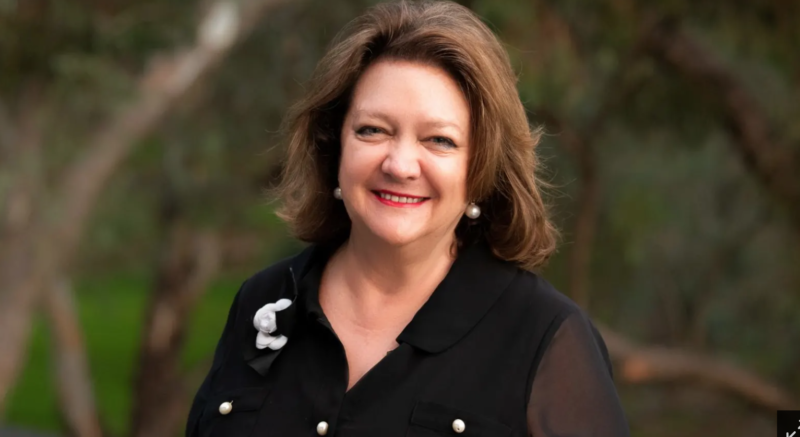 Gina Rinehart has blasted both sides of politics over big government in Australia and warned it is only a matter of time before the resources industry faces new threats like the mining tax and carbon tax in “some foolish form or another”.

Australia’s richest person also took aim at inner city dwellers and “left media”, who she said thought of mining as a dirty word even though it made the biggest contribution to the economy.

Mrs Rinehart said taxes in Australian were too high and there was far too much red tape.

“That huge fat slab of expensive government burdens needs to be cut. Let’s inspire our governments to achieve this,” she said.

The Hancock Prospecting chairman, who topped the Financial Review Rich List with a fortune of $28.9 billion, accused the Morrison government of over spending and pushing debt to record levels that would escalate and leave young Australian with a huge burden.

Mrs Rinehart said the overspending and debt pile would make it all the more hard to deliver the tax cuts and reforms Australia needed.

“Too many in government don’t even recognise that profits are needed so we can reinvest,” she said.

“Sadly, few have even a clue that their tape and tax do nothing to encourage investment in mining, indeed any industry.

“They might mention the word investment, but fail year after year to take the hard decisions that they should, to cut government tape and tax to make Australia, our very high-cost country, more appealing for investment.

“They take the easy road, each party saying, ‘look what we’ve spent, or will spend, to do this or that’. Yes, we know what that is – vote buying.
“And guess whose money they are spending, their own? Of course not, it’s the taxpayers’, each one of yours’, which is why our taxes continue to be too high.”

Mrs Rinehart delivered the blast to politicians of all persuasions in a recorded video package to mark her celebrations for National Mining and Related Industries Day on Sunday.

She appeared wearing a fedora while sitting in an armchair next to a fireplace. There was a cake and coffee cups on a table in front of her in an acknowledgement with “Mates for Mining” morning and afternoon tea events organised for the day.

Mrs Rinehart said the industry couldn’t afford to rest on its laurels after a remarkable year during which mining provided the backbone of the economy through the worst of the COVID-19 pandemic.

“Please don’t forget it was only a few years ago that our industry was faced with both Mineral Resource Rent and Carbon Tax, a double whammy which would have deprived our industry of the profits needed for investment and for extending our mines and or building new mines, indeed would have devastated many in the industry,” she said.

“Now is the time to remind all those we can, that our industry is necessary to maintain the living standards of Australians, its revenue is necessary to help fund our defence force and police, our hospitals and kindies, to help our elderly, maintain some of our airports, bridges, rail and roads, and provide funds for crises.

“Because we can’t sit on our laurels and think that if we do nothing, the double whammy won’t return in some foolish form or another to devastate our industry, an industry we not only derive our livelihoods from, but should be very proud to be a part of.”

A year to remember
Mrs Rinehart’s private company, Hancock Prospecting, booked a $4.07 billion net profit in the year ended June 30, up 56 per cent from the year-earlier $2.617 billion, buoyed by soaring iron ore prices.

The Hancock accounts confirmed its Roy Hill mine had paid down a $10 billion debt and declared a maiden dividend of $475 million just five years after making its first iron ore shipment out of Port Hedland in Western Australia.

Hancock Prospecting’s success also delivered a windfall for the Tax Office, with fiscal 2020 income tax payments reaching $1.55 billion.
Mrs Rinehart said soaring debt would make it harder to cut taxes but it was not impossible.

“And certainly never let the government think it can buy our votes with any form of handouts, i.e. our tax dollars. No, we want them to act more responsibly, in our interests.”

“Our best protection for our industry is the ability to be flexible, not constrained by tape, and to keep our costs down, so we can be internationally cost-competitive despite natural challenges like reducing ore grades and increasing impurities,” she said.

“And huge challenges from lower-cost countries bringing on higher-grade reserves of minerals in competition to our exports.”
The comments are thought to refer to China’s move to develop high-grade iron ore deposits in Guinea’s Simandou province.