WA’s booming resources sector reported record sales of $174 billion in 2020, underpinned by a $116b contribution from the State’s thriving iron ore industry .

WA’s booming resources sector reported record sales of $174 billion in 2020, underpinned by a $116b contribution from the State’s thriving iron ore industry .

The figure eclipses the previous single calendar year or financial year record of $173b set in 2019-20 .

The record sales of the steelmaking commodity, which was up 17 per cent on last year, came on the back of all-time high volumes of 846 million tonnes combined with nine-year high prices.

Gold also achieved record sales of $17 billion, up 25 per cent on 2019. It was achieved off the back of a record annual average Australian dollar gold price of more than $2500 per ounce and came despite a 2 per cent dip in sales volumes.

Nickel sales of more than $3.3b represented the commodity’s highest revenue value in six years.

The strong performance was the result of rising output from BHP’s Nickel West operations as well as the restart of the Ravensthorpe nickel mine by First Quantum Minerals . The petroleum sector — which comprises crude oil, condensate, liquefied natural gas, natural gas and liquefied petroleum gas — had sales of $27b in 2020, a decrease of 31 per cent from $39b in 2019, mainly because of a fall in demand and prices amid the COVID pandemic.

The sector provided employment for a record 140,940 people on average during the year, representing yet another record. More than $20b was invested in the sector, up from up from $17 billion in 2019 and representing the highest level since 2017. 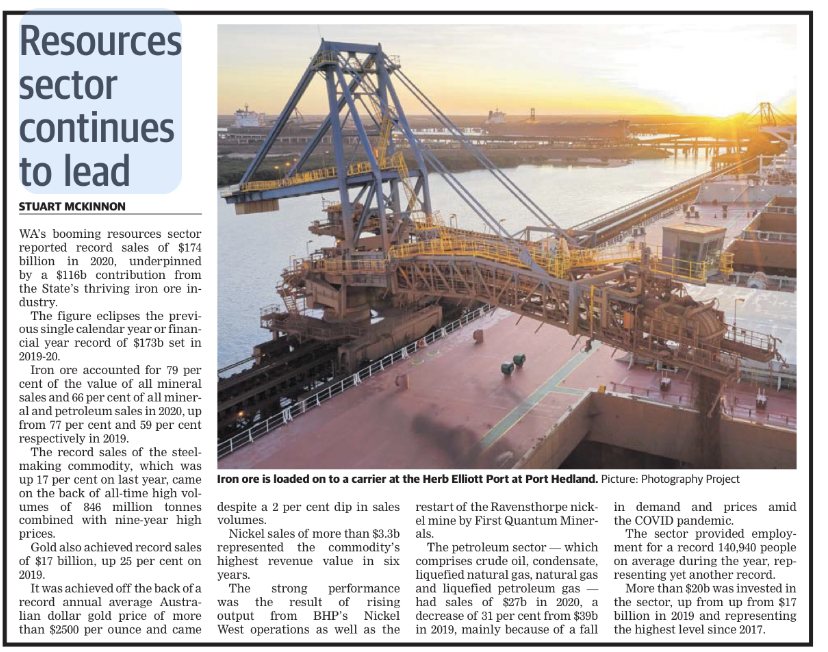