How a perfect storm of Covid, Gina’s billions and a delayed Games propelled Australia to our equal best games result EVER

And Australia's Golden Girl of the Tokyo Olympics is… Gina Rinehart. Yeah, yeah, I know. Ariarne Titmus, Emma McKeon and Kaylee McKeown did pretty well too, but they couldn't have done it without Gina's help. Australia's richest woman, with $30 billion in the kick, was one of the major reasons these Games have been the best for Australia since, well, ever 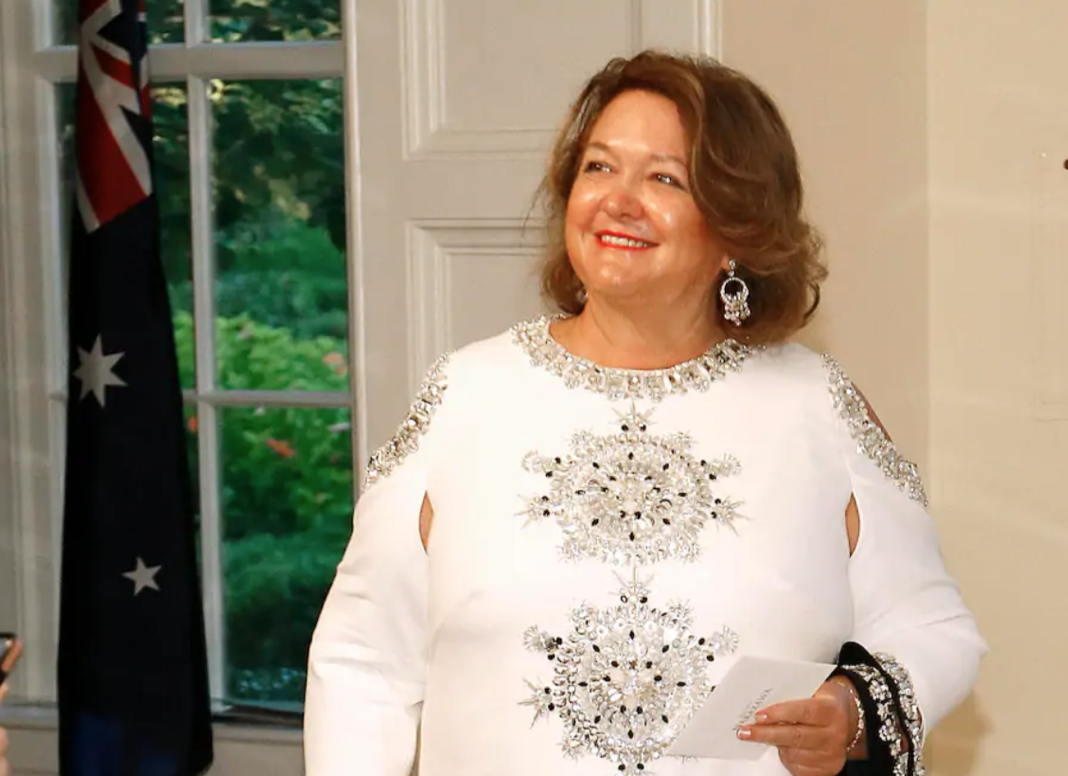 Article by Mike Coleman courtesy of the Daily Mail.

And Australia’s Golden Girl of the Tokyo Olympics is… Gina Rinehart.

Yeah, yeah, I know. Ariarne Titmus, Emma McKeon and Kaylee McKeown did pretty well too, but they couldn’t have done it without Gina’s help.

Australia’s richest woman, with $30 billion in the kick, was one of the major reasons these Games have been the best for Australia since, well, ever.

The Olympics which were supposed to be a disaster, with no crowds, no atmosphere and Covid 19 running rampant in the hallways of the athletes’ village, have turned out to be a record-equalling gold rush for Aussie competitors and they’ve got around $100 million of Gina’s hard-earned to thank for it.

After the debacle of the London Olympics when our male swimmers bombed out in the pool and played up out of it, Swimming Australia’s then-president and America’s Cup hero John Bertrand asked his good mate Gina for help.

She’s been tipping in on average $10 million a year since; first just for the swimming program and then for rowing. She also sponsors beach volleyballer Taliqua Clancy individually.

It’s no co-incidence then that our swimmers, who thanks to Rinehart have access to the best available technical equipment and medical support – to say nothing of cold, hard cash for living expenses – had their most successful Games in history.

But of course, there was more to Australia’s unexpected success than just Generous Gina. The scourge of Covid played its part as well.

Much has been said and written about the destabilising effect the pandemic had on the physical and mental preparation of our Olympians.

Due to lockdown and the cancellation of lead-up events, training schedules were thrown out the window. Athletes couldn’t meet face-to-face with their coaches, pools, tracks and gyms were locked up. Equally upsetting was the constant uncertainty of not knowing whether the Games would even go ahead.

But no matter how hard it was for Australia’s Olympic hopefuls, it was even worse for their counterparts around the world.

Compared to the US, UK and just about every other country competing in Tokyo, Australia had it relatively easy. Spare a thought for, say, the Indian hockey players.

It couldn’t have been easy concentrating on playing a game that may or may not be held a year or two in the future, when bodies were being burnt in overflowing crematorium car parks.

When I asked a colleague in England how his country’s Olympic preparation was going at the height of the pandemic, his answer was one of incredulity.

‘Olympics?’ he snapped. ‘Who cares about the Olympics? We’ve got hundreds of people dying here every day.’

It is history now that despite local opposition, the Olympics did go ahead a year after the scheduled date – and that 12-month delay was another factor in Australia’s outstanding result.

By their own admission, some of our best performers would not have been ready to shine if the Games had been held in 2020. Whether due to injury – such as in the case of 100m freestyle silver medallist Kyle Chalmers who benefitted from an extra 12 months’ rehabilitation after shoulder surgery – or physical or mental maturation like that of unexpected 400m individual medley bronze medallist Brendon Smith who said the delay gave him the opportunity to recalibrate his preparation, the postponement proved a bonus.

But regardless of whether it was due to Gina’s bankroll, Covid’s disruption, or the quality of the coffee supplied by the Team Australia’s personal barista, the fact is that Aussie athletes at these Games have provided us with some indelible memories that will last forever.

Duel in the Pool:

Ariarne Titus versus Katie Ledecky was billed as the showdown of the Games, and it didn’t disappoint. In fact, it over-delivered. With both swimmers taking home two individual gold medals I was shocked to hear an Australian TV commentator label the outcome of their personal battle ‘a draw’. Was he serious? One of Ledecky’s golds was in the 1500m freestyle – a event in which Our Arnie didn’t compete. With Titmus beating Ledecky in the 200m-400m double and taking silver behind her in the 800m, by my reckoning that’s a clear-cut 2-1 win to the Aussie. That bloke should have his microphone licence revoked.

Swim of the Meet:

Another gong to Arnie. Her calmness and faith in the race-plan as she mowed down the mighty Ledecky over the last couple of metres of the 400m freestyle was beyond exciting. It was capital S Sensational. A close second was the anchor swim of Cate Campbell in the 4x100m medley relay. Nothing like leaving us on the edge of our seats Cate.

Best Reaction from the Stands:

Obviously this is a one horse race. Unless someone brought Lawrie Lawrence out of mothballs and gave him a shot of elephant juice, no-one was going to come close to the victory dance Arnie’s coach Dean Boxall put on after the 400m. Unfortunately, there was no-one with a microphone nearby to ask Boxall how he felt, as there had been when Lawrie’s boy Duncan Armstrong won the 200m in 1988. No doubt his answer would have been the same as Lawrie’s as he hit the reporter over the head with a rolled-up start-list. ‘How do I feel? How do you think I bloody feel?’

New Kids on the Block:

Who said freestyle BMX and skateboarding weren’t genuine Olympic sports? No-one from Australia after Logan Martin and Keegan Palmer won gold medals, that’s for sure. The new sports provided plenty of spectacular action (to say nothing of adding to the Aussie medal count) and won over plenty of doubters. Expect similar scepticism when break-dancing makes its debut in three years’ time, to say nothing of the inevitable introduction of e-gaming. No doubt they will also prove immensely popular Olympic sports in Australia – especially when we win a gold medal or two.

Our Own Mo Farah

Peter Bol might not have won gold like Great Britain’s 5000m-10,000m phenom Sir Mo Farah did on four occasions, but the Sudanese refugee made a huge impression on and off the track. A gutsy fourth in the 800m final, Bol’s performance fronting the media in the aftermath of the race was even better. Modest, articulate, and thankful for the opportunities afforded to him and his family by their adopted country, he is on track to become a spokesperson and role model every bit as influential as Somalian-born Farah is in the UK.

Okay, so maybe it wasn’t on a par with John Landy stopping to help the fallen Ron Clarke in the mile race at the 1956 Australian Championships in Melbourne – and then taking off after the disappearing pack of runners and winning . And no, they’ll probably never make a statue of it like they have of the Landy-Clarke moment but hey, it was still pretty good, wasn’t it? I speak of course of Cedric Dubler dropping back to help his team-mate Ashley Moloney win Australia’s first-ever decathlon medal. After two gruelling days of competition Moloney’s legs were turning to jelly in the final stages of the competition-ending 1500m, but with Dubler screaming in his ear, he found something extra to push himself over the line and clinch bronze. Surely that’s got to be worth at least a commemorative postage stamp – or maybe a beer commercial?

Every sports fan with a heart wanted paddle queen Jessica Fox to win gold in Tokyo. She’s been carrying female kayaking on her back since she took silver in London nine years ago. This was going to be her Games, and as undisputed world number one in the Slalom K1, this was her time. And it would have been too, if she hadn’t hit two poles in her final run and ended up with a bronze to go with the one she won in Rio. But all was not lost. She still had the Slalom Canoe final the next day. An event making its Olympic debut – in no small part due to the lobbying of Jess who said if it was good enough for the men, it was good enough for the women – she was world number one in that too. Could she overcome the disappointment of the K1? Could she get the monkey off her back and finally get the full set of medals? Could she avoid those bloody poles? Too right she could. After letting the tension build and with all Australia sweating it out for 24 hours, she completed a perfect run – and that famous Jess Fox smile was back. Good times.

Show Me The Money

So, who is going to cash in the most once they get out of quarantine? Number one is Ariarne Titmus. She might not have won as many gold medals as Emma McKeon but she’s got a touch more star quality out of the pool. Cate Campbell won’t get the big dollars that Ariarne will command in the short-term, but she’ll be putting her name to products and campaigns long after Titmusmania has faded. Right up until she goes into politics, that is. Peter Bol has a back-story that no-one else can match, so he will be in big demand from a growing sector of the market, but the two biggest winners outside of Titmus will be BMX biker Logan Martin and skateboarder Keegan Palmer. They’re young, they’re cool and they sell more T-shirts and caps than the entire Australian swim team combined.

As for the others, there’s always Gina.