WA billionaire Gina Rinehart was last night inducted into the Australian Prospectors & Miners Hall of Fame in recognition of her contribution to the State’s resources sector. 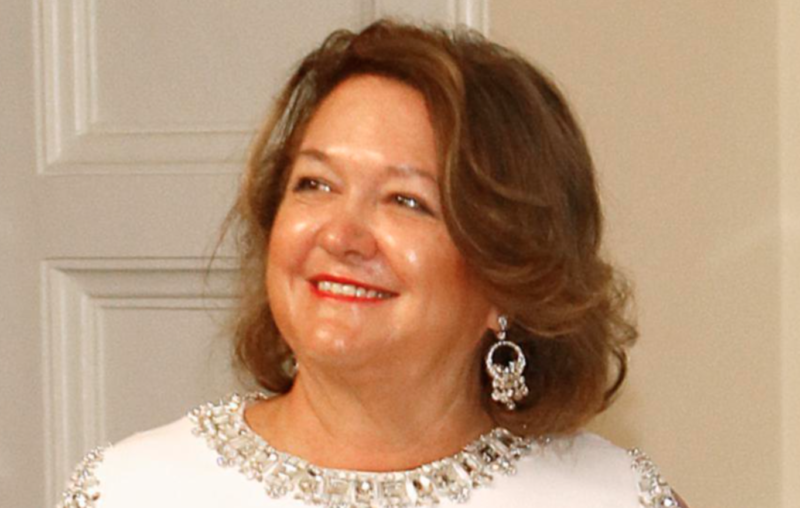 Gina Rinehart has followed in her father’s footsteps.

Article courtesy of the Kalgoorlie Miner.

WA billionaire Gina Rinehart was last night inducted into the Australian Prospectors & Miners Hall of Fame in recognition of her contribution to the State’s resources sector.

Mrs Rinehart was installed under the category of Entrepreneurs and Promoters, for her achievements in leading the development of Hancock Prospecting’s Hope Downs and Roy Hill iron ore mines.

Her father, Lang Hancock, was also a recipient of the award. They are the only father-daughter inductees in the awards’ history.

“In addition to her corporate successes — which have directly led to the creation of thousands of jobs, as well as a material addition to the WA and Australian economies in the form of various taxes and royalties which will accrue to respective governments for many years — Mrs Rinehart is also to be commended for her often unheralded philanthropic donations and her support for numerous sporting and charitable organisations,” Hall of Fame chairman Chris Cairns said.

The recognition follows Mrs Rinehart’s receipt of the GJ Stokes Memorial Award at this year’s Diggers & Dealers Mining Forum in Kalgoorlie-Boulder in October, the second only person and first female to win the trifecta of awards at Diggers.

Thank you, Mr Chairman for this comprehensive factual introduction of Mrs. Rinehart.

Honourable Minister, Honourable Bill, I haven’t seen you for a long time, all other distinguished guests and friends in mining. I’m very honoured to witness Mrs. Rinehart being introduced into the Australian Prospectors and Miners Hall of Fame tonight. Regrettably, she was unable to arrive in Perth in time for this event tonight. I’m sure she would of loved to be here with us.

This 2020 COVID year challenged all of us but hopefully next year will be relatively normal. I think the – okay I can’t resist, I have to get a shot for the politicians – COVID gave politicians such much power *gestures* and they really enjoyed it.

To be fair, they did a good job.

But when I saw these emotions and our premier standing *folds arms* and the borders shut ‘we don’t want you here’, ‘don’t come here’. I was a bit worried for friends and families.

I am a very lucky man indeed, tonight, as the Chairman said we are witnessing the first father and daughter double in the hall of fame history. Back in 2001, I witnessed the reopening of the beautiful building of the Australian Prospectors and Miners Hall of Fame – where the father of Mrs. Rinehart was inducted as one of the first inductees.

For that occasion, Mrs. Rinehart located and bought a small Oster single engine plane somewhere on the east coast, same as her father was using in aerial exploration in Pilbara. The Oster flew from Perth to Kalgoorlie, on its own – with the pilot of course, and then hung proudly in the mine gallery of the hall of fame.

Now it is her fabulous moment, how well deserved, as we can all agree. The Chairman said most of the main things that can be said about Mrs. Rinehart’s achievements. The only thing missing was about the person who she really is. I, as a person who was in the Hancock office already when she took over the company in 1992 might know some more than people think they know.

Obviously, I’m not going to disclose any secrets here. She is definitely a chip off the old block; however, I think she is also quite different in a number of ways. Mrs. Rinehart from the beginning has shown enormous determination to achieve what her father wanted and more. Things which he couldn’t do in his lifetime. She – for a change, hasn’t been shy to go to the banks and borrow money to put them into the ground in searching for the big one.

As the Chairman mentioned the company was financially, modestly speaking in a very weak position. Nevertheless, she borrowed the money, spending its entirety on exploration studies, marketing, all sorts of necessary and unnecessary approvals. Hope Downs was born, and she also –by the way – sold her father’s aeroplane (which was very nice).

We all know that Hope Downs was 50/50 JV with Rio Tinto. It wasn’t the plan in the beginning though. Mrs Rinehart and all of us were dreaming of an independent mine with a separate railway and port. We eventually received a state agreement and necessary permits to build such a project which had partners from South Africa, but that didn’t work. Then we talked with steel makers in China and later with companies in Japan that also hasn’t been successful.

Mrs. Rinehart was always travelling overseas leading the difficult negotiation with us assisting her as much as we could. The timeline for Hope Downs development proposal was rapidly approaching – and some people wanted us to actually loose the entitlement to Hope Downs.

She turned to her father’s old friends, Rio Tinto, and we made a deal in two weeks. It was probably the most intensive time for her and for the whole team. Some night’s Mrs. Rinehart slept on the couch in her office – I snoozed on the floor in my office (the carpet was really soft) for a few hours and then we were back in the boardroom. We had one team. Rio Tinto had team A for day shift, team B for afternoon shift and occasionally they had C team for nights. It was really hard.

Nevertheless, we finished our last negotiation in the last hours of the evening, got the development proposal printed and we took it to the minister just within time. The proposal copies were still warm, I remember – I was holding them and they were still warm from the printer. And we all celebrated with a very late dinner as per Gina’s request after that. Mind you it was the last day and the third extension of the state agreement. That was the last time we had a chance.

Mrs. Rinehart isn’t shy of celebrating special achievements, however, when she moved to the office after her father’s passing one Friday after 6pm, walking around the office she discovered that our geological technical team had our tradition of Friday drinks. We all bought a couple of beers or wine and enjoyed quietly. She didn’t say anything – she just called the MD to her office and after a couple of minutes he came back with a red face and he closed out the tradition permanently. We thought it was unfair but in hindsight it was a good move. Although in the early 90’s it was a very pioneering move especially in West Perth.

She is a demanding boss with a vision and eagle focus. There was some well-known industry experienced man who she invited to help her to run the company, but he didn’t last. There were various rumours circulating around, but the real reason genuinely for their departure was that they thought they knew better, even if they didn’t. A classic attitude – what woman would know how to run an exploration and development mining company. History has proven them wrong. We are a private company so we don’t have company shares to reward employees with. In the initial years, practically until Hope Downs started generating an income and iron ore price and royalties started to rise, mainly from Rio Tinto, our salaries were quite average, with an occasional bonus, also modest. There simply wasn’t much money after exploration and studies to be shared around.

Things much improved after Hope Downs started. She also had faith in people working in the company. As an anecdote I’ll share Hope Downs financing process. We needed fifty percent of the development capital to be project financed. From memory it was 750-800 million AUS dollars. Those days it was a huge amount of money for us, a small company with negligible cash reserves.

We invited a number of financial advisors to do a beauty parade in our office to show what they could do for us for tens of millions of dollars in fees of course. After up to 4-5 presentations, Mrs Rinehart looked at us in the boardroom and said, “boys, you know more about this than those jokers (or something similar), let’s do it ourselves.” We of course didn’t believe we could do it but if the boss wanted, we had to do it and we did.

After Hope Downs, there was a turn for Roy Hill, this is a story of real determination. Back in 1992 the opinion was BHP had dropped the tenements. They didn’t want to prospect as they thought it was a waste of money. This view was held, not just from outside, but from within also, our own geological team and I, who all had a vague idea of what iron ore was!. How wrong we all were, the boss was right as always!

Roy Hill is now a star in the Hancock crown. To be fair to BHP they drilled in the wrong places and commented on historic drilling. When we started exploring the area initially after 1993, we did very limited work and we started to discover the good quality ore. The real work started after 2005 after Hope Downs was built. To bring the project to fruition there wasn’t an easy way, we have to mention that various state governments weren’t openly supportive of Mrs Rinehart and her project. Firstly, Port capacity, for Hope Downs we had 2 births at Harrow Point after dealing with Rio and the ore went to dump there and we thought we could keep these berths for Roy Hill. Unfortunately, that wasn’t the case another company got it. We promised we’d get 2 births with 50mt capacity in the South West Creek requiring an enormous amount of dredging.

We thought great pity, but life goes on, unfortunately there was a change of heart and we were told we would get 1 berth. That would have made the project uneconomic, it took a lot of effort to get that decision reversed. The only nerve wrecking experience was with the railway from the mine to Port Hedland. The only optimal route was through third party tenements in areas where there was no economic ore. The Government representatives promised they would help but nothing came out of it. Eventually we had to spend an unnecessary 400 million extra to get around challenging hill terrain. And again, none of us thought it was possible, but our Chairman thought otherwise. With her determination we did it.

With the finances for Roy Hill at least 10 times bigger than Hope Downs we followed the previous model without the leading financial advisor very successfully. And of course, we were rewarded as handsomely with a big party after signing the finance deal. This is Gina Rinehart even today she’s still very determined to chase new goals / new projects; she’s still demanding but at the same time supportive of the team and generous. Don’t believe what a few disgruntled ones might say at times. I’ve been with the company nearly 30 years now and with her almost 29. Would I stay with her that long if she wasn’t an inspirational one?

I could stay talking for hours to reminisce about those times but now is time to have a drink for her good health.

Thank you very much again for inducting Mrs Rinehart.*Applause*