Atlas Iron has hauled its first shipment of iron ore from the Sanjiv Ridge operation in Western Australia ahead of schedule. The first delivery of iron ore to Port Hedland kickstarts the company's annual production target of four to five million tonnes. The shipment was transported using four haul trucks from MGM Bulk and CSI Mining. 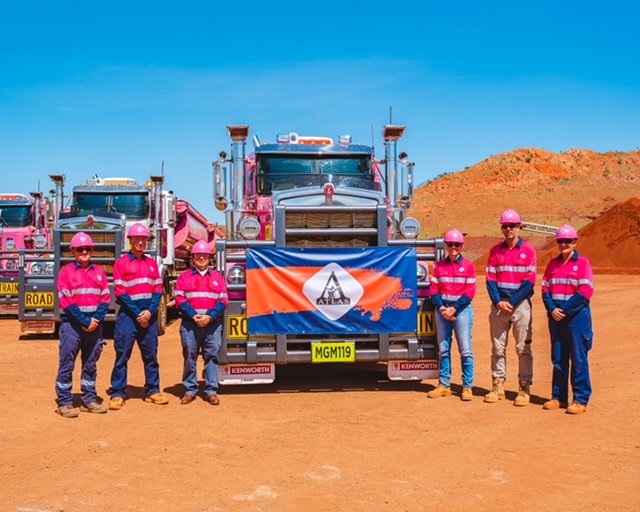 Atlas Iron has hauled its first shipment of iron ore from the Sanjiv Ridge operation in Western Australia ahead of schedule.

Atlas Iron chief executive Sanjiv Manchanda welcomed the milestone for the company, which crushed its first ore at Sanjiv Ridge in early February.

“I’m so proud of our team of Atlas staff and our contracting partners, MGM Bulk, MACA and CSI for working so tirelessly to ensure we surpassed our project targets,” he said.

“It’s always a team effort, and our small team certainly knows how to get things done safely, efficiently and with agility to get a win-win outcome.” Atlas Iron is owned by Gina Rinehart’s Hancock Prospecting. The four haul trucks were painted pink to recognise Rinehart’s support for breast cancer research.

“I also take this opportunity to thank our partners MGM Bulk and CSI Mining who painted their four brand new trucks and crusher, which were used today and for the duration of the project, a striking pink colour in recognition of our group and executive chairman’s commitment to supporting breast cancer research and improving patient care,” Manchanda said.

“These pink trucks now add to a large amount of mining infrastructure in the Pilbara now pink, including trains, ships, processing plants, crushers and mining trucks.” The trucks will haul Sanjiv Ridge’s lump and fines to the Utah Point stockyard in Western Australia, with the mine expected to add five to six years to Atlas’ value chain.